In the ‘untrespassed sanctity of space,’ an Air Force pilot soars at ASU

Editor's note: This story is part of a series of profiles of notable spring 2022 graduates.

What does it mean to be a standout among standouts?

It’s possible that Capt. Kimberly “Kimber” Jackson, a KC-46A instructor pilot who is graduating from Arizona State University with a graduate degree this spring, is the embodiment of that idea.

Jackson is completing a Master of Arts in English through ASU Online while maintaining her active-duty career in the U.S. Air Force.

Foundation Professor of English Robert Bjork, who taught ENG 597, the graduate capstone seminar this spring, said that he had several “extraordinary” students in this cohort “but one especially stands out.”

Of course, that standout is Jackson. If she had taken the typical route, she would have pursued an advanced degree in a STEM field. But instead she chose the humanities. And she did it for love — love of literature, that is. She also wanted to keep the part of her alive that found delight in intellectual and sensory experiences, not just technical details (though she quite likes those, too).

“I absolutely loved my job,” she emphasized, “but eventually I couldn’t ignore how much I missed intellectual conversations about brilliant American authors instead of fuel systems and navigational techniques.

“I may be the operator of a large flying machine,” she continued, “but I also must be able to analyze information, communicate, decide and lead those around me. I enrolled for my own continued learning in a subject that I love, to challenge myself in a way that was different than what I faced daily.”

In her capstone reflections, Jackson pointed to specific epiphany moments in ASU courses. She said that in her ENG 560 "Magical Realism as Global Genre" class taught by Professor of English Claudia Sadowski-Smith, for example, reading works by Isabel Allende, Karen Tei Yamashita, Ana Castillo, and Gabriel Garcia Marquez “changed my opinion of what ‘truth’ meant in storytelling.”

“Simple things like the questions children ask, sunrises, cooking and a routine military training flight became magnificent when viewed through that lens and language of magical realism,” she said. “The factuality of what occurred during observations of such things mattered less than capturing the emotional and human truth within them.”

In addition to academic inspiration, the flexibility afforded by the online format was necessary for Jackson, as her career often finds her “slipping the surly bonds of Earth,” to quote a famous line by John Gillespie Magee. After graduation, Jackson plans to continue her career in the Air Force, using what she has learned at ASU in her daily interactions with other pilots and with senior leadership.

“The recognition of the interconnectedness of disciplines has helped me solve problems at work,” she said, “and the increase in empathetic thought has made me a more understanding and vulnerable leader — and therefore a more effective leader — both of which are essential to success as an Air Force officer.”

Jackson shared more about her career, her ASU Online experience and what she’ll do next in an interview for ASU News.

Question: What was your “aha” moment, when you realized you wanted to study in your field?

Answer: I have loved reading and writing for as long as I can remember. In first grade, I won a young authors award for a poem about going to the beach, and that was the first time I received external validation that I had talent as well as a passion. English continued to be my favorite subject growing up, but it was the freedom to choose my undergraduate major at the United States Air Force Academy that allowed me to begin my focus in this field. I was enjoying my freshman English class but considering an engineering major to assist with my goal of becoming an Air Force pilot, and my professor, Capt. Grace Miller, helped me realize that because careers were assigned by class standing, choosing a major I loved would ultimately help me succeed while making my education more enjoyable and meaningful to me.

This same philosophy helped me select ASU’s online graduate program in English. Although studying English doesn’t have obvious direct connections to my career field, I had already learned how education in a beloved subject held inherent merits.

Q: Tell us about being a female pilot in the Air Force.

A: Being a female pilot in the Air Force is an amazing job, even if it comes with some unique challenges. I grew up believing I could do anything I wanted, which I credit to my wonderful parents and teachers, and to the books that showed me just how many paths there were to choose from in life. I was the only woman in my pilot training class (which isn't surprising since women only make up about 7% of pilots in the Air Force), but I was treated with the same respect and held to the same expectations as my classmates. I've found during my career that the people in the Air Force are supportive and beyond archaic notions that women shouldn't fly and command aircrews in combat. Most of my challenges have been in dealing with regulations that are slow to change and with a public that still expresses surprise at a woman in the iconic green flight suit.

I have had numerous encounters in public, sometimes in uniform, where someone will ask my group what we do — a crewmate will respond that we are Air Force pilots or aircrew, and that curious individual will then direct their attention to me alone and ask what I do. I am gracious and use the moment to educate them, but it catches me off guard that so many Americans would make the assumption that the woman in the group couldn't possibly be a pilot, too!

The Air Force is making huge strides in correcting discriminatory and damaging regulations. In the eight years I have been in the Air Force, the hair standards have modernized to prevent headaches and hair loss, female-specific flight uniforms have become easier to find, aircraft design standards are changing to suit a larger pool of candidates, and accommodations and acceptance for pregnant aircrew have increased. I am currently 24 weeks along with my first pregnancy, and I am still flying missions, have a special flight duty uniform to accommodate my changing body, and am surrounded by incredibly supportive people. I feel like part of my job is to make sure that young girls with even the smallest spark of interest in flying know that they can be pilots, too, and that they won't be alone in their journey, but instead will find so many people to help them and cheer them on.

A: It's freeing. You are in control of a flying machine that has just defied gravity, that can dance through and around clouds, and glide along the wind. I think John Gillespie Magee's poem "High Flight" captures it more beautifully than I ever could. I was actually required to memorize this poem during my freshman year at the Air Force Academy:

Oh! I have slipped the surly bonds of Earth
And danced the skies on laughter-silvered wings;
Sunward I've climbed, and joined the tumbling mirth
of sun-split clouds — and done a hundred things
You have not dreamed of — wheeled and soared and swung
High in the sunlit silence. Hov'ring there,
I've chased the shouting wind along and flung
My eager craft through footless halls of air. ...
Up, up the long, delirious, burning blue
I've topped the wind-swept heights with easy grace
Where never lark nor ever eagle flew;
And, while with silent lifting mind I've trod
The high untrespassed sanctity of space,
Put out my hand, and touched the face of God.

When I was going through pilot training, the syllabus included acrobatic maneuvers such as clover leafs, loops and Immelmanns. Despite the stress and concentration required to execute those maneuvers while being constantly graded, the joy and excitement of it was always present. There's also the thrill of doing something that requires precision, competence and bravery. Especially in military flying, either in formation, during aerial refueling or other tactical events, the standards of performance are extremely high because our mission demands risk. In fact, the KC-46's primary mission of aerial refueling is described as "inherently dangerous" in the governing regulation.

Q: Back on the ground here. What’s something you learned while at ASU — in the classroom or otherwise — that surprised you or changed your perspective?

A: During this program, I learned how the humanities are extremely applicable in every field because they help us to understand the human condition, communicate our ideas and findings in meaningful ways, and intentionally develop our character and values. My capstone reflections have allowed me to define how essential the study of the humanities is for leadership development, which I plan to share with Air Force leaders and my peers as a balance to the current emphasis on STEM. 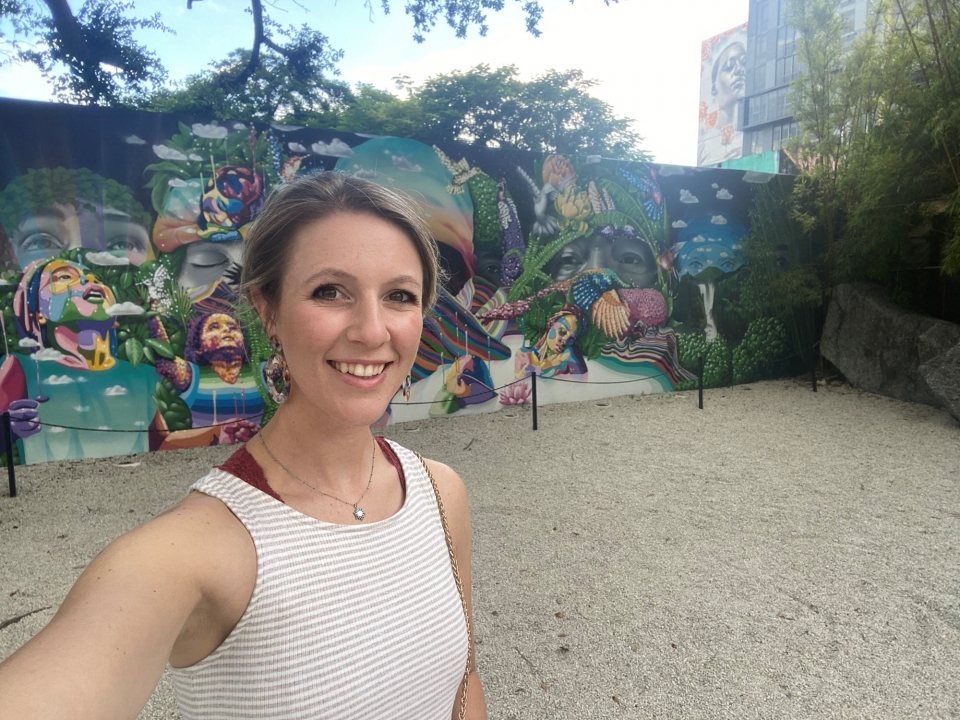 Q: Why did you choose ASU?

A: I chose ASU for the flexibility it afforded me as an active-duty Air Force officer and pilot. I was able to continue with coursework while travelling through multiple time zones, and all the professors were very understanding, offering assignment extensions due to unforeseen itinerary changes.

Q: What’s the best piece of advice you’d give to those still in school?

A: I would advise students still working through their respective programs to take the time for classes that interest them. I took many diverse classes, some that I had no previous experience in, and those choices made my academic journey so fun and interesting. When we choose classes that are not obviously aligned with our focus area or career goals, we find those connections naturally. Especially in humanities, everything is interconnected and helps build our repertoire, even if it doesn’t always look like that on the course catalog.

Q: What are your plans after graduation?

A: After graduation, I plan to use my degree to be a champion for the importance of the humanities. Every leader or prospective leader, in technical arenas or otherwise, should continue self-study in the humanities. They enrich our ability to deal with human problems and help us become thoughtful and eloquent leaders.

Q: If someone gave you $40 million to solve one problem on our planet, what would you tackle?

A: Literacy and education. People are brilliant and creative and wonderful, and if they are given the basic tool of literacy to share and develop their ideas, and to enrich their own lives, so many other issues in the world could be solved at the local level.