A class of Arizona State University students, who were the first to use the new Dreamscape Learn virtual reality platform, unveiled their time-traveling climate-change scenario on Friday.

The 35 students in the “Designing for Dreamscape” course presented their 15-minute final project to their peers and to visitors, including Walter Parkes, the Hollywood producer who is now CEO of Dreamscape Immersive.

Parkes, who was the producer of blockbuster movies including “Gladiator” and “Twister” before moving on to virtual reality, praised ASU for embracing the new media.

“We look at Dreamscape as a set of tools,” he told the students. “The fact that this class could happen this quickly and we could put these tools in your hands is not just important for the university, and hopefully interesting and important for you, it’s also very important for us.”

LiKamWa said the students ranged from second-year undergraduates to PhD students and came from a range of disciplines: computer science, digital culture, architecture, design, electrical engineering and others.

They were divided into four teams: narrative storytelling, art, sound and pod integration.

Over the 13-week semester, they collaborated to create timelines, develop characters and animation, record and edit sound, and then put it all together. They worked in the Unity game-development platform to produce the project, called “Theta Labs.” 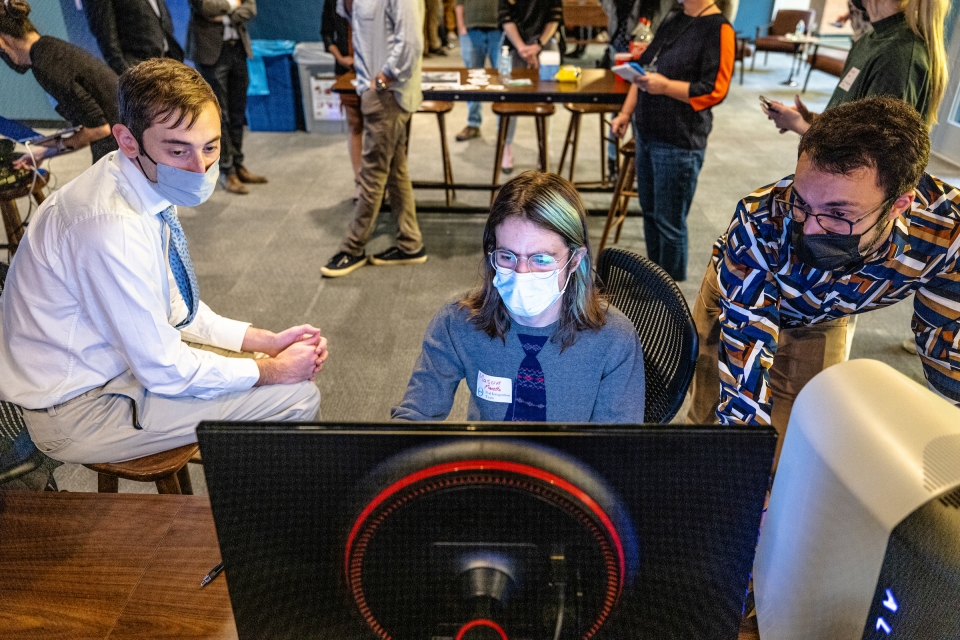 "Designing for Dreamscape" students (from left) Adin Dorf, Mason Manetta and Alireza Bahremand study a computer monitor to make sure everything is set before Walter Parkes and Michael Crow experience the new “Theta Labs” virtual reality program in the Dreamscape Learn lab in Creativity Commons on the Tempe campus. Photo by Charlie Leight/ASU News

Dreamscape Immersive was created in 2016, when computer scientists combined the motion-capture techniques used in movies with computer programming in a platform that can track people in real time to create avatars in a virtual world.

In 2020, ASU partnered with the company to form Dreamscape Learn to create fully immersive virtual reality learning systems for the ASU community and beyond.

At Friday’s presentation, ASU President Michael Crow told the students that virtual reality is an important way to teach.

“As things have become more complicated, like global climate change, scientists keep teaching in ways that a few people really master, a few people understand, and most people don’t,” he said.

“That creates massive levels of science illiteracy. You can imagine that there could be a thing like a pandemic that some people don’t even believe in.”

Teaching through storytelling is one way to change that, Finn said.

“Science itself is a vast system of storytelling,” he said.

Dreamscape can take an abstract concept like climate change and make it real.

“And most importantly, we can make a hopeful story,” Finn said.

“Because the biggest challenge we have right now is that too few people feel empowered to act. The technical solutions are there, but what we lack is the collective will and decision-making to take action.”

Crow and Parkes were the first to experience “Theta Labs.” In the Creativity Commons on the Tempe campus, they donned the virtual reality headsets, backpacks and hand and foot trackers and went into one of the two Dreamscape pods, a room-size “black box” that amplifies the VR experience with haptic sensations like a shaking floor and blowing wind. Two additional pods are being built on the first floor of the Creativity Commons for biology students, who will use Dreamscape Learn for their labs. Each of those new pods will accommodate 12 learners.

In “Theta Labs,” an animated koala bear tells the participants that they’re summer interns and must go on a mission either into the future or the past to fight the effects of climate change.

After the demonstration, Crow said the visualization was very powerful.

“You’ve got this fantastic intellectual construct where you can create time travel as a way to address the complexities of climate change,” he said.

“It allows you to visualize something you can only think through.” 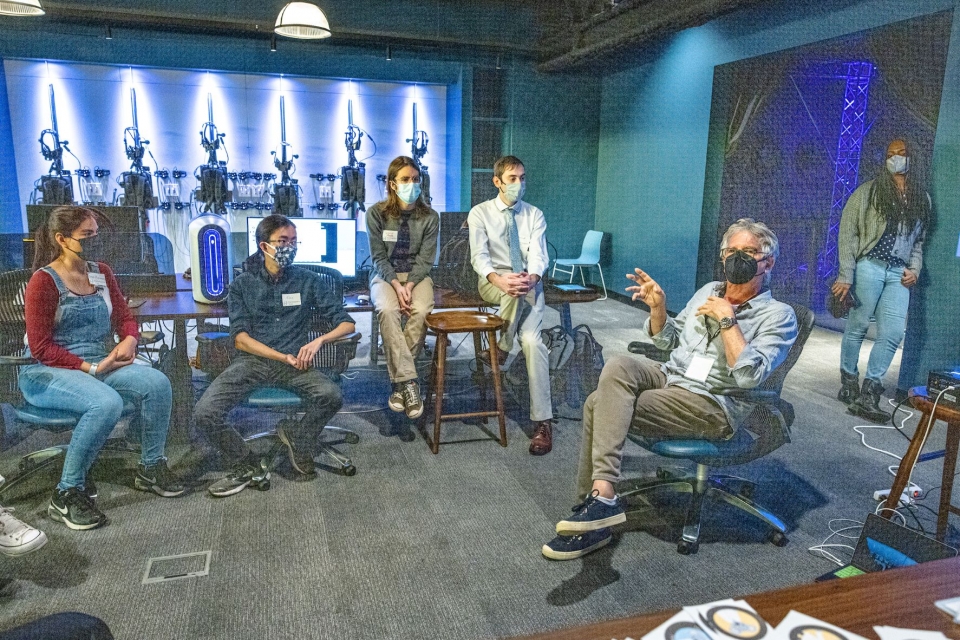 Walter Parkes, former Hollywood movie producer and now the CEO of Dreamscape Immersive, gave the students feedback after experiencing their project "Theta Labs" in the Dreamscape Learn Lab on the Tempe campus. At left in the background are the headsets and backpacks used in the Dreamscape Pods. Photo by Charlie Leight/ASU News

Parkes sat down with the students to give constructive feedback on their project, telling them that they had the technology down and could refine their storytelling.

“We’ve learned that less is way more when it comes to dialogue and narration,” he said of Dreamscape Immersive. “You’re inviting me into this extraordinary environment that is, even in this form, a mind-blowing reality. And I just don’t want to hear a lot of stuff.”

The mission is set in an imaginary city, and Parkes suggested the team could have used Phoenix.

“Strangely enough, the way to be universal is to be very specific because when you generalize, it’s less engaging.”

He said their environmental sound design is good but that they should add music.

Noemy Esparza-Isaacson, a master’s of fine arts student in digital technology, was on the pod integration team and said Parkes’ feedback was great considering that Friday’s presentation was the first walk-through.

“To have been able to put together this experience and demo it in such a short period of time was like watching magic happen before my eyes,” she said, noting that a typical virtual reality experience takes years for the Dreamscape team to create.

“We were trying to engage the audience above and beyond what they already hear — ‘recycle’ or ‘don’t drive your car.’

“By having the koala and this way of traveling back and forth, we were hoping to plant that seed, ‘How am I going to do that out in the world?’ ” 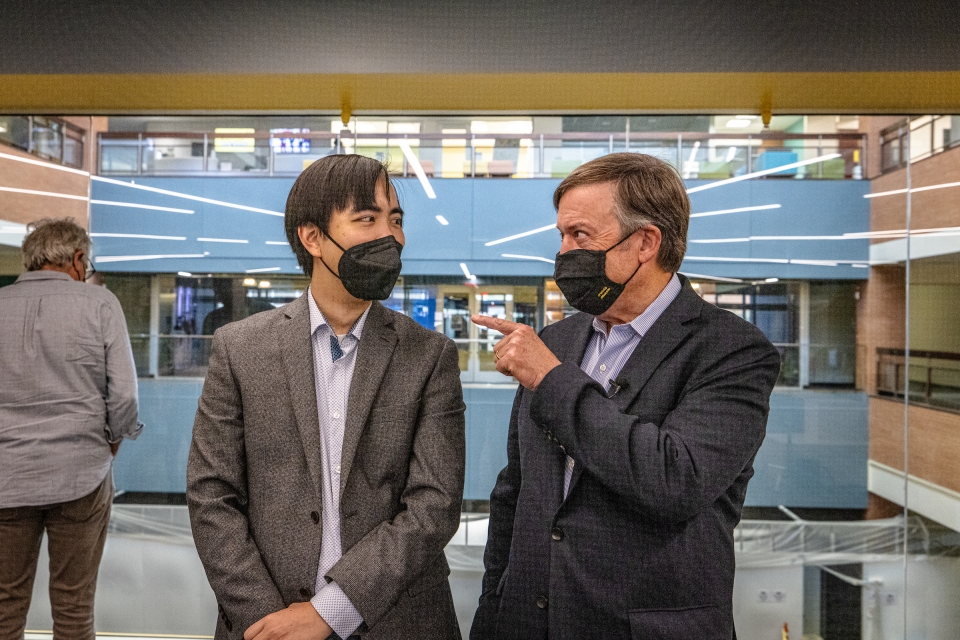 Frank Liu, a graduate student in computer engineering, was on the narrative storytelling team and said the project started with a lot of strong opinions.

“We wanted something that was for everyone. We had some crazy ideas — a ‘Mad Max’ apocalypse world, maybe,” he said.

“We worked with the professors to hone the story down and put together something that we had creativity and agency on.”

Liu is one of LiKamWa’s PhD students, researching virtual reality.

“I work on developing haptics, but I wanted to expand my story-writing skills to not just be pigeonholed into technical things,” he said.

LiKamWa said that “Theta Labs” is not the final product.

“The product you’re going to see today is actually the students,” he said.

“This is the product of the university and the class engaging these students to work with each other, both inside their teams and across teams, at this intersection of the skills of the future.

“In my eyes, this is the creative workforce of the future.”