The School of International Letters and Cultures held its annual Language Fair online last month for the second year in a row due to the COVID-19 pandemic. The event, which has been running for nearly 25 years, showcases the university’s more than 20 language programs to prospective students from high schools across Arizona.

Previous years’ events have drawn as many as 2,500 attendees, said Instructor of Arabic Umar Sulayman, the coordinator of the Language Fair.

This year’s event focused on the theme of music, which was represented in activities like a virtual scavenger hunt as well as mini lessons from representatives of each language program.

Another crucial part of the Language Fair is competitions for dioramas, posters, poetry recitations, dramatic performances and roleplay exercises. The various activities provide high schoolers with multiple entry points to learning about languages and cultures and showcasing their existing knowledge.

Principal Lecturer in Chinese Xia Zhang, who has been involved with the Language Fair for about 20 years, coordinated the Chinese-language competition this year and, along with colleagues, also met with prospective students to teach mini language lessons and detail the course offerings from the Chinese program and Chinese Language Flagship Program.

“Learning a foreign language is not simply about learning the language itself. It opens a window for people to learn about and better understand different cultures and perspectives in the U.S. and other countries,” Zhang said. “For those who would be interested in such a journey, (the school's) programs will provide an excellent, engaging and enjoyable learning experience.”

German Lecturer Sara Lee agreed, noting that the students she spoke with were excited about the opportunities that minoring or majoring in German — or any other language — could provide. For example, she told students about internships in Germany and how studying a language can give an advantage when navigating the job market.

In addition to discussing career potential with the high school students, Lee also taught them and their parents how to speak a little German. They learned how to greet each other, ask simple questions and carry on a conversation by using phrases such as “Mein name ist _____” (My name is _____) and “Wo wohnst du?” (Where do you live?).

Even 15 minutes of learning vocabulary and practicing pronunciation can prove helpful, and these activities establish a foundation for future language studies. Sulayman said that the school has seen increased enrollment in language classes in years past, and he credits the Language Fair for driving interest in the school’s many programs. 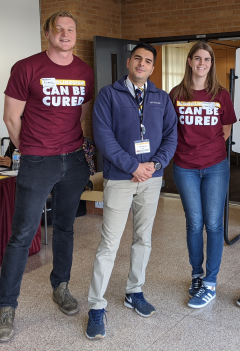 Instructor of Arabic Umar Sulayman (center) is the coordinator of the Language Fair.

The mini lessons incorporated languages from across the school's programs and even some not currently offered by the school.

Comparative Culture and Language doctoral student Gina Scarpete Walters volunteered as an instructor at the Language Fair for the first time this year, teaching a mini lesson in modern Greek — currently, only ancient Greek is taught as part of the school's classics program — to provide students with “a taste of a major European civilization.”

Scarpete Walters noted that two Greek holidays fell on the date of the Language Fair, March 25: the Feast of the Annunciation and Greek Independence Day, also known as the celebration of the Greek Revolution of 1821.

She brought the theme of music into her lesson by sharing the Greek anthem with students, along with discussions of traditional customs and food, the Greek alphabet and the history of modern Greek.

“The Language Fair’s mission of promoting language learning and cultural diversity brings to life the purpose of our studies and the heritages that paint meaning into our words,” Scarpete Walters said.

Senior Lecturer in Spanish Dulce Estévez was able to connect with students over her own heritage as a Mexican woman who attended a Phoenix high school and went on to become a faculty member at ASU.

Estévez talked to the high school students about their various options for incorporating language learning into their college plans. With Spanish, in particular, students at ASU can choose between a minor and a major; they can go on to pursue master’s and doctoral degrees; they can participate in study abroad programs or earn a certificate; and they can also enroll in the Spanish Heritage track for those who grew up around Spanish speakers. Spanish language skills and cultural competency are frequently used in careers in fields ranging from medicine and law to engineering and architecture.

“Having a double major with (the school) is very advantageous and easier to achieve than most people imagine,” Estévez said. “That is why meeting faculty during the Language Fair is such a beneficial experience for high school students.”