In the 1950s, the plastics industry moved to shift public thinking and consumption practices around plastics from a reusable material to a disposable and mass-produced product. Fast-forward a few decades, and single-use plastic packaging and plastic waste continue to increase across the world, impacting the environment, wildlife and ourselves.

That shift assumed access to Indigenous lands — an entitlement rooted in colonial relations toward land, the environment and knowledge, states author Max Liboiron.

These issues are examined on a scientific and personal level by Liboiron (pronounced ”lee-bwah-ROHN”) in their book “Pollution is Colonialism,” the recipient of the 14th annual Labriola National American Indian Data Center National Book Award.

Liboiron is an associate professor of geography and is formerly the associate vice president of Indigenous research at Memorial University in St. John’s, Newfoundland and Labrador, Canada. Liboiron is Red River Métis/Michif raised in Lac la Biche, Treaty 6 territory.

Liboiron will deliver the Labriola Center's National Book Award lecture from 10 to 11 a.m. Friday, Oct. 14, and will answer questions from the audience. The hybrid event will be streamed in person on the Tempe campus at Hayden Library (Room 236) and online via Zoom.

“I am pleased we are able to amplify Dr. Liboiron’s work since it presents a well-needed perspective in environmental science and environmental justice activism,” said Alexander Soto, director of the Labriola Center. “For far too long, Indigenous peoples have been at the mercy of colonial science framework and discourse. This book challenges mainstream notions on environmentalism and forces non-Indigenous people to see it’s bigger than pollution.” 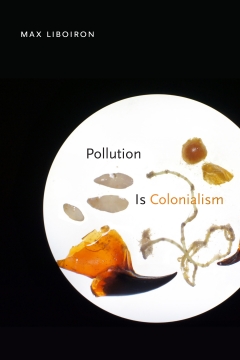 “Pollution is Colonialism” was published in 2021 by Duke University Press and presents a framework for understanding scientific research methods as practices that can align with or against colonialism, with a specific focus on plastic pollution.

Liboiron points out that even when researchers are working toward benevolent goals, environmental science and activism are often premised on a colonial worldview and access to land. In addition, they posit that pollution is not a symptom of capitalism, but a violent enactment of colonial land relations claiming access to Indigenous land.

At Memorial University, Liboiron directs the Civic Laboratory for Environmental Action Research (CLEAR). CLEAR develops feminist and anti-colonial methodologies in the natural sciences that foreground land relations to study plastic pollution. Additionally, Liboiron has played leading roles in the establishment of the field of discard studies (the social study of waste and wasting), the Global Open Science Hardware Movement (GOSH) and is a figure in feminist science studies, Indigenous science and technology studies, and justice-oriented science methods.

Soto adds, “At the Labriola Center, Liboiron’s book is quite popular among students of all programs and disciplines. Students from the American Indian Studies program to the Earth Systems Science for the Anthropocene (ESSA) initiative have commented that it is a vital resource in their studies. Ultimately, it is a vital resource for all degree programs.”