William H. Kimbel, ASU Virginia M. Ullman Professor of Natural History and the Environment with the School of Human Evolution and Social Change, former director of the Institute of Human Origins, and an eminent scholar and teacher in the field of human origins died on April 17 at the age of 68 after a valiant three-year effort against cancer.

“Bill Kimbel was a tremendous leader in his field and in our university community,” Arizona State University President Michael Crow said. “During his 13 years as the director of ASU’s Institute of Human Origins, Bill’s talent and dedication shepherded vast growth and support that raised it to the next level, and his brilliant scholarship inspired peers and students alike to explore the mysteries of humankind. His energy and ideas will be deeply missed.”

Kimbel had an international and noted career as a scientist, researcher, professor and mentor. During more than 40 years as a paleoanthropologist, his research on the origin, evolution and anatomy of Australopithecus afarensis, early Homo and other early hominins has profoundly influenced how we view the evolution of our ancestors. Through his research, public outreach and student training, Kimbel’s scientific rigor has been a benchmark against which all paleoanthropological work is measured.

“Professor William H. Kimbel’s directorship of (the Institute of Human Origins) was a labor of love. The institute prospered under his steady, thoughtful and forward-looking leadership. He also had an incredible impact on the students, faculty and staff that he worked with throughout The College of Liberal Arts and Sciences,” said Patrick Kenney, dean of The College. “We will be forever grateful to have had such an accomplished researcher and educator in the field of paleoanthropology share his passion and expertise with the ASU community.” 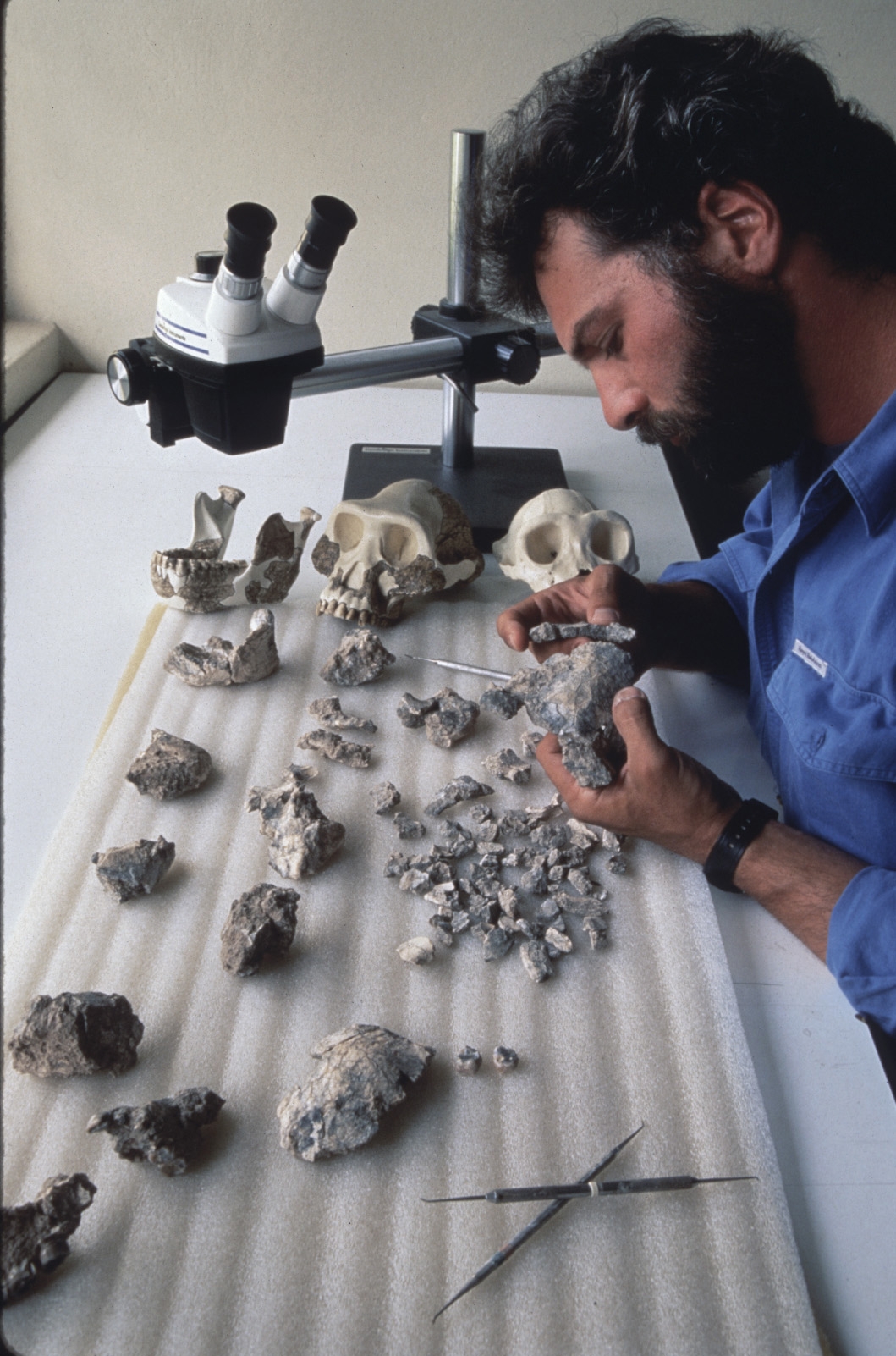 Bill Kimbel at work in the lab.

Kimbel earned his doctorate from Kent State University in 1986, but his impact on the field began a decade earlier. He joined the International Afar Research Expedition as an assistant in 1976 and served as associate curator and head of physical anthropology at the Cleveland Museum of Natural History from 1981 to 1985.

In 1985, he joined the Institute of Human Origins, initially based in Berkeley, California, and later at ASU. He continued to conduct paleoanthropological fieldwork as leader of institute projects in Olduvai Gorge, Laetoli, Tunisia and the Yuanmou Basin in China. In 1990, after a period of paleontological research hiatus in Ethiopia, he re-initiated the Afar Research Expedition as the Hadar Research Project and directed the scientific investigations of that critical A. afarensis site for 30 years.

“Working with Bill, whether scouring the field under the blazing hot African sun, or in the lab hunched over, cleaning and examining and measuring recovered fossils, or collaborating on professional articles, was always rewarding,” said Donald Johanson, founding director of the Institute of Human Origins. “With his quick, keen mind, his endless curiosity and his brilliant retention of anatomy, he was one of my most valued colleagues, and one of the best writers I’ve ever worked with. Also one of my dearest friends. There was no one like Bill Kimbel, and there never will be again. It was an honor to spend nearly half a century with him, but it was not enough.”

Critically, Kimbel’s influence on the field extends far beyond his own area of specialization through his service to Journal of Human Evolution, paleoanthropology’s flagship publication. Through his published work, including "The Skull of Australopithecus afarensis" (with Donald Johanson and Yoel Rak), Kimbel shaped how the field of paleoanthropology interprets the fossil record. For his contributions, Kimbel was elected a fellow to the American Association for the Advancement of Science in 2005.

Last year, Kimbel stepped down as the director of the Institute of Human Origins. During his impressive career as an educator, he trained graduate and undergraduate students, led the Hadar Field School and was nominated for several teaching awards at ASU. His love of science and the active discovery of the fossil remains of our ancestors has influenced hundreds of students and careers, and his attention to detail and ability to tell the evidence-based story of our ancestors made the field better.

Bill Kimbel also believed that collaboration among paleoanthropologists and data sharing were critical to fully understand our evolutionary past, and he was a key player in the creation of the African Rift Valley Research Consortium.

“Bill was one of few paleoanthropologists of my generation who have made a difference in our field,” said Yohannes Haile-Selassie, director of the Institute of Human Origins. “Through his numerous critical-thinking and evidence-based publications in the last 40 years, Bill has left behind a great depth of knowledge that will live forever and be utilized by present and future generations of human origins students.”

Kimbel’s tireless exploration of human history in deep time, his famous wit, the depth of his love and his legacy as an ambassador of paleoanthropology will live on among family, many friends and hundreds of students that cherished his teaching and leadership. Kimbel leaves a Rift Valley-sized hole in his field, which will never be filled, though he will live on forever in the fossil record.

A celebration of life will be held at 2:30 p.m. on Saturday, May 28, in the auditorium of the Rob and Melani Walton Center for Planetary Health on the ASU Tempe campus.