Professor William (Bill) Petuskey is retiring after an extremely successful 39 years at Arizona State University and the School of Molecular Sciences. His extensive teaching, research and leadership roles at ASU have been immeasurable.

“Bill played a vital role on Panch’s team to advance the research mission of the university,” said Patrick Kenney, dean of The College of Liberal Arts and Sciences, Foundation Professor in the School of Politics and Global Studies and vice provost for Academic Enterprise Strategy. “In a fast-paced environment, he was thoughtful, thorough and found creative solutions to challenging implementation problems. Bill always worked collaboratively across the Knowledge Enterprise leadership, with deans, sponsors, directors, chairs and investigators. I learned a great deal from him in our time together in what was then called OKED.”

Praise for Petuskey comes from the sciences and humanities alike.

“Bill Petuskey is a scientist and a leader in scientific research and administration,” said Professor George Justice. “But I want to say that Bill Petuskey is also a thoughtful human being — and has been both a very strong mentor and a very good friend to me, an English professor and former dean of humanities, who worked alongside Bill in OKED as we tried to build research in ASU humanities. Although not a humanist, Bill Petuskey is a deeply humane person who always put the university, in all its various byways, first. It has been my privilege to know him and learn from him.”

Petuskey grew up in Salt Lake City and received his Bachelor of Science from the University of Utah’s department of materials science and engineering in 1973.

In 1977, he received a Doctor of Science in ceramic science from Massachusetts Institute of Technology (MIT) and went on to conduct postdoctoral research at Leibniz University Hannover in Germany. Petuskey then joined the University of Illinois as an assistant professor of ceramic science.

In 1983, together with his wife, Karen, Petuskey moved to Arizona and what was then the department of chemistry at ASU. He had met School of Molecular Sciences Professor Alexandra Navrotsky as a graduate student at MIT, as well as professors LeRoy Eyring, Bruce Wagner and Michael O’Keeffe.

Only three years later in 1986, Petuskey was appointed assistant chair of space by Bill Glaunsinger (department of chemistry chair), and he oversaw the design and building of the Bateman Physical Sciences H wing. 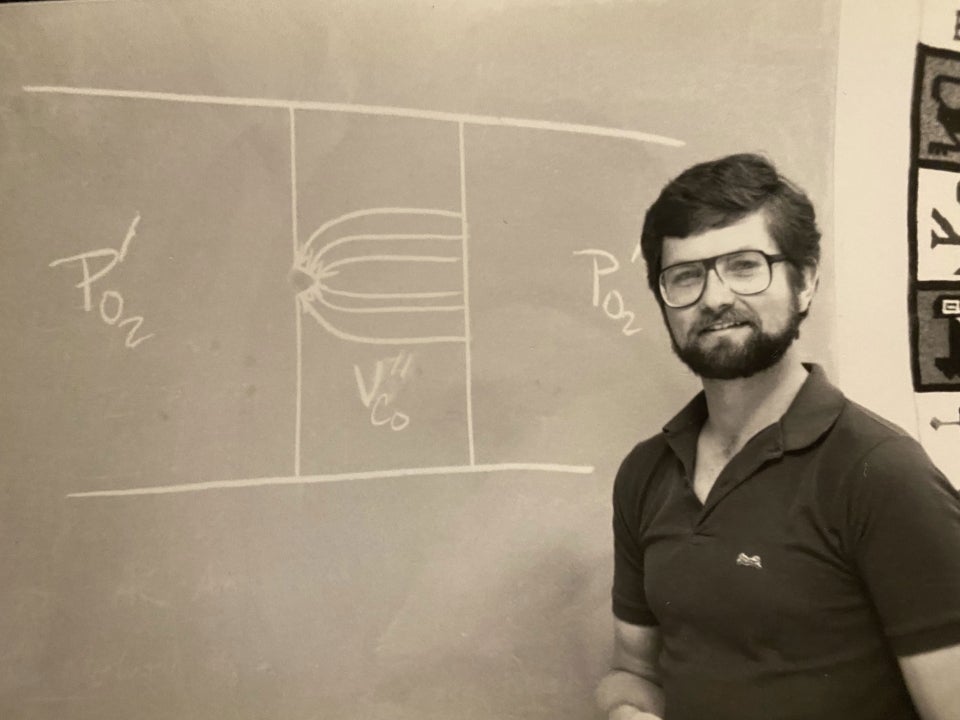 Bill Petuskey in his early days at ASU.

Amidst various leadership roles came some exciting research advances: Petuskey, along with six other faculty, was awarded a large Materials Research Grant by the National Science Foundation (NSF), which became the Materials Research Science and Engineering Centers (MRSEC) and was funded by NSF for about 13 years.

During this time, several Science and Nature papers were published on new functional materials under extreme conditions of pressure, temperature and chemical environments.

From 2002 to 2006 Petuskey was associate chair for what was then the department of chemistry and biochemistry (chaired by Bob Blankenship).

“Bill and I led the department from 2002 to 2006,” said Blankenship, a professor emeritus. “It was a time of great increase in student numbers and programs. We were always scrambling to have enough sections of freshman chemistry to meet the ever-increasing demand. At one point, we maxed out the facilities and proposed to the dean that we could offer evening sections. They were very reluctant to do this, but we persisted and they finally agreed. Just a year later, it was impossible to imagine not having the evening program.

“Bill was always great to work with. We came from opposite ends of the department, as he was from the materials/inorganic side and I was from the biochemistry side. But we complemented each other well, and that diversity in background and perspective greatly benefitted the department as it was growing extremely rapidly.”

From 2006 until 2012, Petuskey was the chair of the department of chemistry and biochemistry, assisted by two very able associate chairs, Jim Allen and Wilson Francisco.

This was also a time of huge growth for the department as they hired 13 new faculty in a two-year period. New degree programs were also initiated, including a Bachelor of Science in biochemistry (medicinal chemistry), which remains hugely popular to this day.

“The thing that was fun for me was just getting to know all the people,” Petuskey said. “The people I’ve met and worked with over the years have made all the difference. It was a social as well as research environment and intellectual enterprise. At each stage, the people I really wanted to work with were there.”

In 2009, together with engineering Professor James Adams, Petuskey started ASU’s School of Materials, increasing their ranking to No. 22 nationally. After three years, the school was absorbed into the School for Engineering of Matter, Transport and Energy.

From 2012 to 2016, Petuskey served as ASU’s associate vice president for science, engineering and technology when, among many advances, he supported ASU's compact X-ray free electron laser (a world first), which is housed in the Biodesign Institute. It will provide X-ray pulses so short that they outrun all X-ray damage processes. As a result, scientists can conduct novel science to explore the structure and dynamics of nature and materials as never before.

In 2016, there was a national program for new technologies to develop new materials in half the time for half the cost. Petuskey was appointed as director of the Advanced Materials Initiatives (AMI) in Knowledge Enterprise to help design approaches to scientific problems from a different direction. Starting with a significant problem and working backward to the important scientific ideas.

The Navrotsky Eyring Center for Materials of the Universe headed by Navrotsky and the grant from the NSF's Quantum Leap Challenge Institutes program headed by School of Molecular Sciences Professor Vladimiro Mujica would not be possible without the AMI.

Over his 39 years at ASU, William Petuskey has been a catalyst for growth and development for the School of Molecular Sciences and for the university as a whole.